Eid al-Fitr (/iːd əl ˈfɪtər/ eed əl FIT-ər; Arabic: عيد الفطر‎ ʻĪd al-Fiṭr, IPA: [ʕiːd al fitˤr]),[4] also called the "Festival of Breaking the Fast", is a religious holiday celebrated by Muslims worldwide that marks the end of the month-long dawn-to-sunset fasting of Ramadan.[5] This religious Eid is the only day in the month of Shawwal during which Muslims are not permitted to fast. The date for the start of any lunar Hijri month varies based on when the new moon is sighted by local religious authorities, so the day of celebration varies by locality.

Eid al-Fitr has a particular salat (Islamic prayer) that consists of two rakats (units) generally performed in an open field or large hall. It may only be performed in congregation (jamāʿat) and features six additional Takbirs (raising of the hands to the ears while saying "Allāhu ʾAkbar", meaning "God is the greatest") in the Hanafi school of Sunni Islam: three at the start of the first rakat and three just before rukūʿ in the second rakat.[6] Other Sunni schools usually have twelve Takbirs, similarly split in groups of seven and five. In Shia Islam, the salat has six Takbirs in the first rakat at the end of qira'a, before rukūʿ, and five in the second.[7] Depending on the juristic opinion of the locality, this salat is either farḍ فرض (obligatory), mustaḥabb مستحب (strongly recommended) or mandūb مندوب (preferable).

Eid al-Fitr was originated by the Islamic prophet Muhammad. According to certain traditions, these festivals were initiated in Medina after the migration of Muhammad to Mecca. Anas, a well-known companion of the Prophet, narrated that, when the Prophet arrived in Medina, he found people celebrating two specific days in which they entertained themselves with recreation and merriment. At this, the Prophet remarked that Almighty has fixed two days of festivity instead of these for you which are better than these: Eid al-Fitr and Eid al-Adha.[8]

Traditionally, Eid al-Fitr begins at sunset on the night of the first sighting of the crescent moon. If the moon is not observed immediately after the 29th day of the previous lunar month (either because clouds block its view or because the western sky is still too bright when the moon sets), then the holiday is celebrated the following day.[9] Eid al-Fitr is celebrated for one to three days, depending on the country.[10] It is forbidden to fast on the Day of Eid, and a specific prayer is nominated for this day.[11] As an obligatory act of charity, money is paid to the poor and the needy (Arabic: Zakat-ul-fitr) before performing the ‘Eid prayer.[12][better source needed]

The Eid prayer is performed in congregation in open areas like fields, community centers, or mosques.[10] No call to prayer is given for this Eid prayer, and it consists of only two units of prayer with a variable amount of Takbirs and other prayer elements depending on the branch of Islam observed.The Eid prayer is followed by the sermon and then a supplication asking for Allah's forgiveness, mercy, peace and blessings for all living beings across the world. The sermon also instructs Muslims as to the performance of rituals of Eid, such as the zakat.[13] The sermon of Eid takes place after the Eid prayer, unlike Friday prayer which comes first before prayer. Some imams believe that listening to the sermon at Eid is optional.[14] After the prayers, Muslims visit their relatives, friends, and acquaintances or hold large communal celebrations in homes, community centers, or rented halls.[10]

Many Muslims often bring prayer rugs to the Mosque on Eid al-Fitr.

The prayer starts by doing "Niyyat" for the prayer and then Takbir is said by the Imam and his followers. Next, "Takbeer-e-Tehreema" is recited, followed by Allahu Akbar three times, raising hands to the ears and dropping them each time, except for the last when the hands are folded. Then the Imam reads the Surah-e-Fatiha and other Surah. Then the congregation performs Ruku and Sujud as in other prayers. This completes the first rakat. The congregation rises up and folds their hands for the second rakat., during which the Imam recites Surah Fatiha and another Surah. After this, three Takbirs are called out just before the Ruku, each time raising hands to the ears and dropping them. For the fourth time, the congregation says Allah o Akbar and subsequently goes into the Ruku. The rest of the prayer is completed in the regular manner. This completes the Eid prayer. After the prayer there is a khutbah.[16] 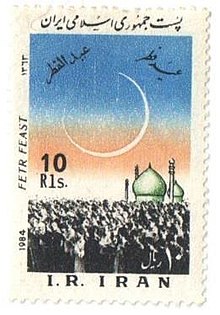 Prayer starts with the Niyyat followed by five Takbirs. During every Takbir of the first rakat, a special Dua is recited. Then, the Imam recites Sūrat al-Fātiḥah and Surat Al-'A`lá and the congregation performs Ruku and Sujud as in other prayers. In the second Rakat, the same above steps (five Takbeers, Sūrat al-Fātiḥah and Surat Al-'A`lá, Ruku and Sujud) are repeated. After the prayer, Khutbah starts.[17]

Jordanians decorate their homes and prepare sumptuous meals for family and friends. They prepare new clothes and shoes for the festival. Eid festivities in Jordan may vary culturally depending on the region, but one common thread in all celebrations is generosity and hospitality. It is a common Jordanian tradition for families to gather at the patriarchal home after the Eid prayers. Before the special Eid meal is served, young children will line up in front of each adult family member, who dispense money as gifts to the children.

Saudis decorate their homes and prepare sumptuous meals for family and friends. They prepare new clothes and shoes for the festival. Eid festivities in Saudi Arabia may vary culturally depending on the region, but one common thread in all celebrations is generosity and hospitality. It is a common Saudi tradition for families to gather at the patriarchal home after the Eid prayers. Before the special Eid meal is served, young children will line up in front of each adult family member, who dispense money as gifts to the children.[18] 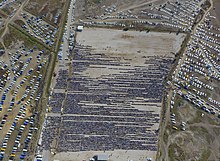 Aerial view from wherever Eid al-Fitr prayer held outside the Iranian city of Bandar Torkaman on 26 June 2017.

In Iran, at the last days of the month of Ramadan, several groups of experts representing the office of Ayatollah Khamenei go to the different zones of the country to determine the date of Eid al-Fitr.[19] Iranian Muslims take part in the Eid al-Fitr prayer and pay the Zakat al-Fitr.[20] The Eid al-Fitr prayer, and the following sermon, has been led by Ayatollah Seyyed Ali Khamenei, Supreme Leader of Iran, at Tehran's Imam Khomeini Grand Prayer Grounds (Mossalla).[21][22] The celebration is typically marked by a one- or two-day national holiday.[23]

Traditional Bayram wishes from the Istanbul Metropolitan Municipality, stating "Let us love, Let us be loved", in the form of mahya lights stretched across the minarets of the Blue Mosque in Istanbul

In Turkey, nationwide celebrated holidays are referred to as bayram, and Eid al-Fitr is referred to as both Şeker Bayramı ("Bayram of Sweets") and Ramazan Bayramı ("Ramadan Bayram"). It is a time for people to attend prayer services, put on their best clothes (referred to as bayramlık, often purchased just for the occasion), visit all their loved ones (such as relatives, neighbors, and friends), and pay their respects to the deceased with organised visits to cemeteries. It is also customary for young children to go around their neighborhood, door to door, and wish everyone a "Happy Bayram", for which they are awarded candy, chocolates, traditional sweets such as baklava and Turkish Delight, or a small amount of money at every door.[24]

In the predominantly Sunni Muslim culture of Afghanistan, Eid al-Fitr holds significant importance and is celebrated widely for three days. The most common greeting is Kochnai Akhtar (Blessed Eid) in the Pashto-speaking community. Afghans start preparing for the Eid al-Fitr festival up to ten days prior by cleaning their homes (called Khana Takani in Dari). Afghans visit their local bazaars to buy new clothes, sweets, and snacks including Jelabi (Jalebi), Shor-Nakhod (made with chickpeas), and Cake wa Kolcha (a simple cake, similar to pound cake). On the day of Eid al-Fitr, Afghans will first offer their Eid prayers and then gather in their homes with their families, greeting one another by saying "Eid Mubarak" and usually adding "Eidet Mobarak Roza wa Namazet Qabool Dakhel Hajiha wa Ghaziha," which means "Happy Eid to you; may your fasting and prayers be accepted by Allah, and may you be counted among those who will go to the Hajj-pilgrimage." Family elders will give money and gifts to children. It is also common practice to visit families and friends, which may be difficult to do at other times of the year. Children walk from home to home saying "Khala Eidet Mubarak" ("aunt happy Eid"), and they receive cookies or Pala. At night, multiple campfires are set around houses, sometimes to the point that entire valleys may initially appear to be engulfed in flame. Celebratory fire with automatic rifles, particularly tracer rounds, can also be expected in high density.[25]

Egyptians spend the first day of Eid al-Fitr to gather all family members and celebrate the Eid at public gardens. It is customary for children to also receive an Eidi, a small sum of money to be spent on activities throughout the Eid.[26] Egyptians like to celebrate with others, so the streets are always crowded during the days and nights of Eid.[27]

There were several accounts of a heightened number of sexual assaults and rapes during the 2006 Egyptian Eid.[28][29][30][31] Subsequent reports indicated that the phenomenon continued to grow in following years.[32][33][34][35] One Egyptian journalist wrote "The Eid al-Fitr holiday following this year's Ramadan brought its usual share of sexual harassment".[36] Operation Anti Sexual Harassment, an Egyptian organisation founded to protect against sexual assaults, described Eid al-Fitr as a "season for harassment",[37] and the prevalence of such attacks "a trend that has become associated with Eid al-Fitr celebrations in recent years".[34] Despite this rise, sexual assault and "intrigue" with women during Eid al-Fitr dates back to the early 19th century, as Edward Lane alludes to.[38] In 2013, allegations, the discussion of which was considered taboo,[39] surfaced in Cairo and Tanta.[40][41][42] 2014 saw lower rates of attempted harassment, and activists reported more confidence since amendment of the penal code.[43] 141 police reports for harassment were filed in Cairo in 2015, though this number may underestimate the issue as many reports were reportedly withdrawn.[44] Despite a reduction to 120 complaints and 35 arrests for harassment in 2016,[45] many women still find it necessary to take significant precautions during Eid.[46] 2018 showed continued evidence of reduction.[47]